In this Levoit LV-H134 review, I’ll walk you through various aspects that make this powerful Levoit air purifier what it is. I’ll illuminate its pros and cons for you to make your shopping process more informed and therefore more objective. Overall, the Levoit LV-H134 air purifier is a venerated air filtration designed for large and extra-large rooms. 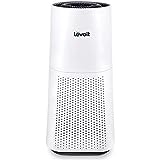 As mentioned above, the product comes across as a carefully thought-out, majestic tower design. While the thing appears cylindrical, a closer look reveals it’s not a perfect cylindrical shape. It somewhat narrows or tappers toward the top where its sleek, easy-touch, sensitive control panel lies.

The machine gathers in contaminated via a 360° inlet, and inlet comprises of tiny holes arranged in a way that enhances the appeal of the air cleaner. But while the design allows you pretty much install it anywhere in the room, Levoit advises users to leave a 15-inch clearance all around.

And at 28.5 lbs, the LV-H134 is quite sturdy. It doesn’t look or feel flimsy at all. And even though it’s a tower air purifier, it’d not be super easy to topple it if it stood in the way. Now, 28.5 lbs is still portable, but this isn’t like the best air purifier for travel or anything like that. It’s a little heavy, but it has wheels that boost mobility astronomically.

But the product is a little bulky at 32.2 inches tall. Be sure to have ample space above its air outlet before you order it.

What’s the CADR for the LV-H134? The Clean Air Delivery Rate for this product hovers around 312. That means it moves 312 cubic feet every passing minute. In an hour, it moves at least 18,720 cubic feet. It’s a beast.

Levoit claims that the LV-H134 cleans an 1,170 square feet in once every 30 minutes and 710 square feet every 18 minutes. But what’s the ACH of the LV-H134? What amount of space would it clean most optimally?

In a room with a square footage of 1,120 and standard U.s. ceiling height of 8 feet, the purifier would deliver just 2 air exchanges (ACH or Air Changes Per Hour). Now, is that good enough? Not if you have asthma or other respiratory illness.

In a 710 square feet room (a very large room, maybe 25 ft. x 28 ft.), this air cleaning expert would circulate the air 3.29 times. Again, that’s not ideal if you have difficulty breathing.

Any asthma patient needs at least 4 exchanges if they desire to resolve their stuffy nose issue completely. The most ideal room size for the LV-H134 if you suffer from allergy and asthma would be 550 square feet. Then, you’d get an ACH of at least 4.25 — let’s make it 4. If you’re healthy, though, it’d be ok to use the monster in a 710 square feet room.

Like all Levoit air cleaners, the LV-H134 cranks out loads of 3-stage True HEPA filtration. There’s a preliminary filter for larger particles, a True HEPA one for fine particles (PM2.5), and an activated carbon filter for resolving gaseous pollutants and Volatile Organic Compounds such as benzene and formaldehyde. The product removes large particles (larger than 10 microns) and small ones alike. As small as o.3 microns and even smaller.

Since this machine decreases the amount of PM2.5 substantially, it’d be a great bet for anyone living near a highway that sends tons of exhaust in their homes. In fact, the LV-H134 is an extremely effective car exhaust remover.

Do you know why the LV-H134 pulls the air in powerfully? It’s because of its unique Cyclone Technology, a technology that helps it purify the air 50% faster than other purifiers.

But wait, is that even true? How many products did the manufacturer test to arrive at that conclusion? This cyclone technology is the exact same magic that makes Dyson air and vacuum cleaners deliver spectacular filtration performance. And yes, the LV-H134 does provide an extremely strong 360-degree suction.

All the features that makes the LV-H134 what it is come arranged in a circle with the PM2.5 value display at the center. Unlike with the LV-H133 and a couple other Levoit purifiers, the power button doesn’t occupy the center. Instead, the on/off button is located on the periphery near the 1-12 hours timer.

The other buttons on the cute, super intuitive control panel include the sleep mode, auto mode, and on/off display button. The rest of the buttons are the check-filter indicator and fan speed button, and 3 fan speed indicators. The fan speed button empowers to cycle through the 3 fan speeds, Low, Medium, and High.

As you might expect, the Levoit LV-H134 tower air purifier is taller (32.2″) and heavier (27.2 lbs) than the LV-H133. Features-wise, nothing really special differentiates this behemoth from its sibling. Both are nice-looking tower air purifiers that reel in polluted air near the bottom and expels it via the top. But the LV-H134 treats a much larger area.

I must highlight one key difference between the LV-H134 vs LV-H133. While the H133 is content displaying just color codes for the current air situation, the LV-H134 goes a step further. It not only shows a color depicting the air quality in the room but also shows real-time PM2.5 count.

The smart sensor of the LV-H134 detects how much PM2.5 (fine particles) there is within one cubic meter of the unit (µg/ m³). By the way, PM2.5 refers to the tiniest airborne particles that can exist.

If ever there was a reason to buy an air purifier, it’d be to eliminate PM2.5 particles. The good thing with this PM2.5 removal machine is that it shows you how much you still have in the room. You get to see whether the thing is working and how hard it’s doing the job.

But while Levoit says the PM2.5 display reports real-time data, that’s not 100% correct. In truth, the data you get is at least half a minute old! That’s not too stale, is it?

How to Read the PM2.5 Laser Particle Sensor of the LV-H134

The lower the PM2.5 count value shown, the better. If the number is anywhere between 0 and 135, understand you have a low to moderate amount of sub-2.5 microns particulate matter. But if the number goes past 135, it means your air quality is at a really bad place. Good news! The LV-H134 has everything it takes to remove PM2.5 particles.

Apart from having a digital PM2.5 particle counter, the LV-H134 also features a color-based air quality indicator. The indicator is a ring that encircles all the contents of the LED display, and it lights up Red, Orange, Green, and Blue.

Each color reflects a specific air quality situation in the room. Red means Bad, Orange means Okay-ish, and Green means Good. And when the air is totally free of germs, dust mites, mold spores, and other airborne particles, the ring lights up Blue. I’d have expect Blue to mean Good and Green to mean Very Good. But that’s no big deal.

I like that it needs just 45W at that performance level. Obviously, this is a high-efficiency air cleaner. One that deserves serious consideration from you.

25 dB on low and 54 dB max. Its quiet operation on fan speeds 1 and 2 can be surprising for such a powerful monster. However, High can be a little too loud for some people.

It’s CARB certified. You can have it shipped to stringent California. Also, it’s FCC and ETL certified.

Overall, the LV-H134 is worthy every dollar they ask for it. I recommend this for allergy sufferers and healthy people who crave tons of clean air the whole time. It’d be overkill for most bedrooms, but you sure can use it in your moldy, musty basement. But if you have a very large basement, go for the Medify MA-112.